Contracts with a Russian Company: What a Foreign Counterparty Should Keep in Mind

Contracts with a Russian Company: What a Foreign Counterparty Should Keep in Mind 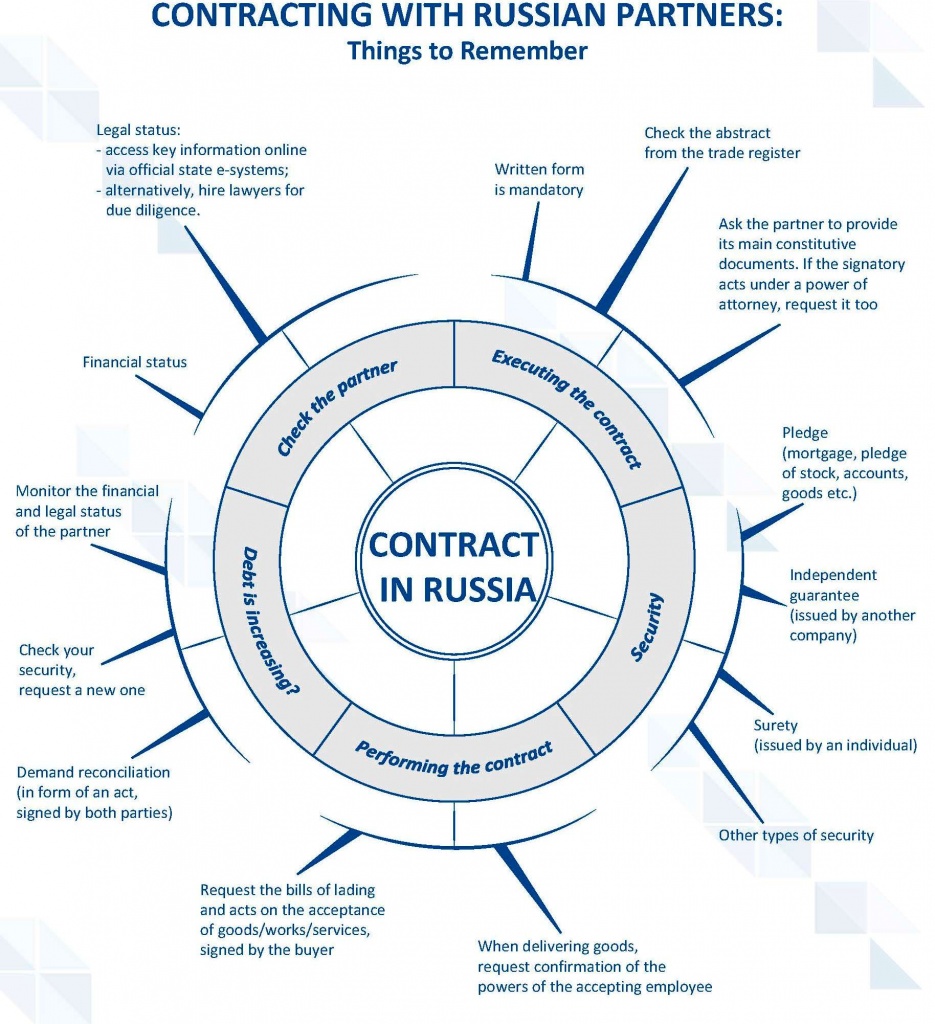 Foreign companies working with Russian partners often face unexpected problems. Russian partners sometimes challenge even those transactions that have been partly performed, deny the fact of supply or of rendering of services, and refuse to discharge their debts.
Following the standard recommendations below may help you avoid conflicts and unforeseen expenses:

Below, you can find more details and our recommendations.


1. CHECKING THE RELIABILITY OF THE RUSSIAN PARTNER

When beginning to work with a Russian partner on a long-term or a one-time, but still a big and expensive project, it is always advisable to conduct full due diligence.

Always check the counterparty before entering into business relations. Do not forget about further checks: even trustworthy companies may become bankrupt, undergo ownership changes or be liquidated.

If such a due diligence is for some reason impossible or impracticable, a brief check of reliability of the Russian partner may be carried out with the use of the following free public resources (unfortunately, these are in Russian only):


If it is hard to overcome the linguistic barrier, you can approach specialized firms providing aggregated information from the aforementioned resources, including in English. Finally, the reliability of the Russian partners can be checked by lawyers. Expenses for a standard due diligence usually stay within EUR 1,000.

When executing a contract, make sure to check the powers of the signatory. In Russian companies, the power to sign is vested in:

A. the sole executive body (as a rule, the “General Director”);

B. the person acting under a Power of Attorney signed by the sole executive body.

Several companies may have similar names. Check the primary state registration number (PSRN, “OGRN”) and taxpayer’s identification number (TIN, “INN”) of your partner to make sure who you are going to make deal with.

Make sure to request the documents confirming the powers and keep them:


You may request these documents directly from the Russian partner – this is the common business practice in Russia. The charter and extract from the trade register may be requested from any inspectorate of the Federal Tax Service of Russia. An up-to-date extract can also be uploaded in electronic form at egrul.nalog.ru.

If the document is being signed by a person acting under a Power of Attorney, to check his/her powers, you need to request his/her Power of Attorney (the original), as well as all documents mentioned above in order to confirm the powers of the sole executive body who signed the Power of Attorney. If the transaction is indeed one of great importance – you have a full right to ask for a notarized Power of Attorney (notarization will cost around EUR 30). If a Power of Attorney is certified by a notary public, its validity can be additionally checked via the online register of cancelled Powers of Attorney at reestr-dover.ru.

A transaction can be invalidated if it has not been approved by the participants/shareholders or the Board of Directors, which may be mandatory under the law or the company’s charter. Request the charter and check if the transaction is not a major one (for instance, major transactions include those whose amount exceeds 20% of the counterparty’s assets) and whether there are no other restrictions of the director’s powers. If there are any – request the corporate approval.

The institute of pre-contractual liability, so familiar to foreign businesses, has appeared in the Russian law only recently – in 2015. The practice of its application in Russia is in the state of formation. If the negotiations with a Russian partner are deadlocked due to the bad faith of the latter, recovering damages from it may not be as easy or effective, as one might expect.

Pre-contractual liability in Russia is only developing. The law allows recovering damages in case of bad faith negotiations, but it is yet difficult in practice.

Under the Russian laws, contracts and other transactions between companies shall be in writing only. Here, the written form can be complied with not only by way of drafting a document signed by both parties, but also by an exchange of letters, telegrams, teletype and fax messages, as well as exchanges of other documents, including in electronic form, delivered by the means of communication that allow to reliably prove that the document originates from the party to the contract.

Partner’s refusal to sign a contract in hard copy should be a warning to you. A contract in written form is necessary for a Russian company to execute bank payments and for customs clearance. Working without it may be a sign of under-declaration of customs value by the Russian partner when importing goods. That is why from the practical standpoint, it is better to draft and execute a bilateral document on paper, which will help to:


This recommendation equally applies to separate orders issued under contracts: these are better formalized as appendices to the contract signed by both parties.

To safeguard oneself from instances of default on the obligations, demand security, especially if the goods are not delivered/services are not rendered/works are not performed simultaneously with the payment therefor:

6. PERFORMANCE OF THE CONTRACT

The delivery of goods (rendering of services, performance of works) shall be effected in exchange for a document signed by the partner (an act, a consignment note, etc.), especially where a supply agreement made with a Russian partner provides for deferred payment for the goods supplied or payment on credit. Here, you will need a confirmation:

When agreeing on the forum for the disputes in the contract, you may choose between:


If the judgment needs enforcing in Russia, it may be more feasible to choose the Russian court: this would be cheap and fast. If the contract is complex and case-specific, consider international commercial arbitration – the arbitrators are usually more qualified, but the procedure is more expensive.

Specifying a foreign state court as the competent one may be inefficient. The dispute won against a Russian partner in such a court will in most cases require enforcement in Russia. According to the Russian law, such a judgment may be enforced only where allowed by an international treaty, to which Russia is party. Such treaties are not numerous: these mostly include treaties with the CIS and developing states. In exceptional circumstances, enforcement is allowed without a treaty, based on the international principle of reciprocity, but that is an extremely rare occasion in the practice.

When choosing between a Russian state court and an international commercial arbitration, you need to take into account the following factors:

The general statute of limitations in Russia is 3 years.

The law also provides for special – longer or shorter – statutes of limitations. You can find a more detailed discussion in our summary on the statute of limitations.