Reform of the Arbitral Tribunals in the RF

Reform of the Arbitral Tribunals in the RF

From November 1, 2017, the arbitral tribunals (treteyskiye sudy)1 that failed to obtain the permission from the Government of the Russian Federation will no longer be allowed to hear disputes. Introduction of the authorization-based order of granting the right to establish institutional arbitral tribunalsis aimed at achievingone of the main objectives of the non-government arbitration reform in Russia, namely, combatting "puppet" arbitral tribunals, enhancing trust to arbitration and improving its quality.

As a result, this will affect arbitration of disputes under contracts, which already contain arbitration clauses, and trigger the need to amend drafts (templates) of the contracts yet to be signed.

For more information on this and other changes of the arbitral tribunals’ system in Russia see our new review below.

These acts have introduced substantial changes to the Russian legislation on arbitral tribunals, whose overall purpose is to bring Russian arbitral proceedings to the international standards.

·   The parties to an ad hoc arbitration cannot agree to waive the right to address a state court for assistance.

·   Ad hoc arbitral tribunals are deprived of the right to ask state courts for assistance in discovery.

·   The parties’ agreement on the finality of the award of an ad hoc tribunal is invalid, i.e. a party does not forfeit the right to apply to a state court to vacate such an award.

If a foreign arbitral institution failed to obtain a permission to administrate arbitration in Russia, its award will be deemed an ad hoc arbitral award subject to the applicable restrictions (see above).

This creates a risk that Russian courts will not recognize foreign arbitral institutions’ awards on corporate disputes if such institutions failed to obtain a governmental permission.

·    The new law provides that the arbitration agreement can be concluded, among other things, through an exchange of letters, telegrams, telexes, telefaxes and other documents (including electronic ones), transmitted through communication channels allowing to reliably ascertain that the document comes from the other party, as well as by way of an exchange of procedural documents.

2. WHICH PERMANENT ARBITRAL INSTITUTIONS HAVE ALREADY OBTAINED PERMISSIONS OF THE RUSSIAN GOVERNMENT?

To rule out abuses in this sphere, the legislator introduced the authorization-based order. The right to exercise the functions of a permanent arbitral institution is now granted by a Russian Government order upon the recommendation of the Council for the Improvement of Arbitration Proceedings at the Russian Ministry of Justice.

A permanent arbitral institution can be created at a nonprofit organization (NPO) subject to the following requirements: 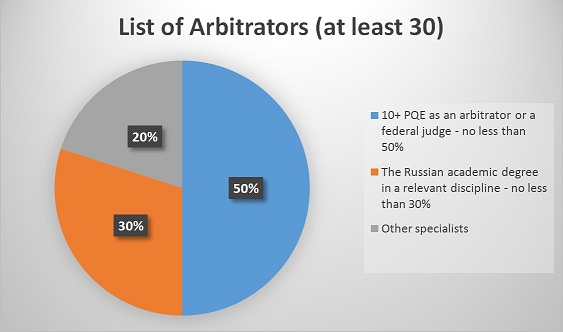 As of August 28, 2017, only 4 permanent arbitral institutions have been allowed to operate in Russia:

At present, there is no unified register of permanent arbitral institutions that have obtained permissions from the Government of the Russian Federation.

3. THE STATUS OF THE CLAUSE ON THE ARBITRATION OF DISPUTES IN AN ARBITRAL INSTITUTION, WHICH HAS NOT OBTAINED A PERMISSION FROM THE RUSSIAN GOVERNMENT

An arbitral institution that does not meet the new rules by November 1, 2017, will not be able to continue administrating arbitral proceedings.

This means that arbitration clauses on submission of disputes to such an arbitral institution will become unenforceable.

After November 1, 2017, arbitration clauses on submission of disputes to permanent arbitral institutions that failed to obtain the permission from the Russian Government will become de facto unenforceable.

In that case, pending disputes will be administered as ad hoc arbitrations unless the parties agree on a different dispute resolution procedure or the arbitration agreement becomes unenforceable.

Although before the Arbitration Act became effective, the legislation did not contain an express prohibition of arbitration of corporate disputes, state courts largely adhered to the view denying the arbitrability of such disputes.

At present, the following corporate disputes are arbitrable: disputes related to the incorporation of a legal entity, its management, participation in a commercial legal entity, as well as in a number of NPOs.

Many corporate disputes are subject to additional rules; thus, they can be submitted to arbitration only if they meet the following conditions:

1)      The legal entity, all of its participants and other persons, being claimants and defendants, have concluded an arbitration agreement;

2)      The arbitral institution has adopted rules on arbitration of corporate disputes;

3)      The Russian Federation is the seat of arbitration.

The following corporate disputes with an express public interest (from the legislator’s point of view) cannot be arbitrated:

Arbitration agreements on the submission of corporate disputes to arbitration can be concluded on February 1, 2017 the earliest. The agreements made before that date are deemed unenforceable.

The legislation does not limit submission to arbitration of any disputes on titles to real estate. However, no entries on real estate titles will be made into the public register2
absent an enforcement order issued by a state court.


A similar requirement – obtaining an enforcement order – applies to making entries into any legally relevant registers under the arbitral award (Art. 43 of the Arbitration Act), including the USRLE, EGRIP, EGRN and any other registers, the making of entries into which entails the creation, change or termination of civil rights and obligations.

The key recommendation is to check the arbitral institution specified in the arbitration clause when making the contract – otherwise, it may turn out to be unenforceable.

1The new law uses a number of terms perceived as synonyms in the everyday speech: arbitration (arbitrazh), arbitral tribunal (treteysky sud), and arbitral institution (arbitrazhnoye uchrezhdeniye). However, the law distinguishes them. Thus, under the law, arbitration is synonymous with arbitral proceedings, that is, the process (not to be confused with the household word “arbitrazh”, frequently denoting a state commercial court). Arbitral tribunal, pursuant to the law, is precisely the person (arbitrator) or a group of persons (a panel of arbitrators) examining the dispute. The distinction between institutional arbitrations and ad hoc arbitrations, made by experts on arbitral proceedings, is found in two terms used in the law: “permanent arbitral institution” (a sub-division of an NPO, carrying out the function of administering arbitration on the permanent basis) and “arbitral tribunal formed by the parties to resolve a specific dispute”. All these details can be seen elaborated in Art. 2 of the Arbitration Act.


All newsletters of Mosgo & Partners are available on our website and LinkedIn.

This newsletter shall not be viewed as legal advice. It is prepared for educational and informational purposes only. Mosgo & Partners is not responsible for any consequences of reliance on the information contained in this newsletter without specific professional advice.